Dries Van Noten (born 12 May 1958, Antwerp) is a Belgian fashion designer and an eponymous fashion brand. In 2005, the New York Times described him as “one of fashion’s most cerebral designers”.  His style is said to be “eccentric”, and fell out of favor during the long period of minimalistic fashion in the early 1990s, only to make a come back towards the mid-2000s, culminating with Van Noten’s winning of the International Award of the Council of Fashion Designers of America in 2008. That same year, he dressed actress Cate Blanchett for the Academy Awards, and has continued to dress her for other red carpet events since then….READ MORE on Wiki

Fashion Week Paris WORLD EXCLUSIVE for Style Voyeur, a conversation with Parisian Illustrator, Nicolas Tavitian – as he takes us inside a Paris Fashion Week show!

At Paris Fashion Week we asked Nicolas, you were on Style Voyeur back in 2010 (see here), how did you get to know Style Voyeur? I don’t remember anymore how I got to know Style Voyeur. I can’t help thinking it is my curiosity which drove me to your blog. But I can still remember what I thought about your pictures and your words the first time I glanced at them, which is more important. I was intrigued because I found that the people you photographed had a very relaxed attitude, looking satisfied and happy to be there, happy to show at fashion week, what they did or their outfits. It was like pictures taken during a party, not during what could be considered in Paris as a working moment. It was cooler. It told me something about Perth but also something about the Paris show.

This is a major fashion week scoop for me, one that I am very blessed to share with my readers, how is it that you are able to give Style Voyeur such an EXCLUSIVE? I END_OF_DOCUMENT_TOKEN_TO_BE_REPLACED

Paris Fall fashion collections began awkwardly. Milan had been so stoutly clear: Bottega Veneta, Jil Sander, weird but wonderful Prada. Now we were 27 floors above the Left Bank, in an office, and the funny thing was — what were the chances? — all of Paris on Thursday morning was soaked in a thick fog. The gray matched the mood of designer, Nicolas Ghesquiere  Balenciaga. It wasn’t intentional. Briefly, Mr. Ghesquiere’s idea was to capture the different styles of office attire among women. “Balenciaga Inc.,” he said backstage. Balenciaga Chic is probably what his fans would prefer to see instead of belted double-faced coats, turtleneck sweaters with cream A-line skirts (though lovely) and chunky sweat shirts in a kind of, um, animal motif. Another blousy top featured cartoon graphics with sayings like “Join a weird trip.” On one level, a spoofy take on corporate dressing is welcomed. All those strange proportions and codes might work as an odd little mirror held up to reality. At one point fashion designer Ghesquiere sent out what looked like jumpsuits; the upper half was a conventional blazer, and the bottom might have been track pants in parachute silk prints, finished off with a belt so that your rear end was guaranteed to look enormous. In New York, we’ve all seen that mishmash of styles on the subway: the thick leather jacket, the ’80s trousers and two-tone elf boots, the touch of metallic animal prints. And the attitude is admirable because it really isn’t about

Fashion. But on another level, you don’t need this point of view from Balenciaga. It’s a bit pedestrian. Although the collection had a number of strong pieces, like the skirts and many of the tops, there is just not enough merit to the idea to keep you interested. Fashion Designer Rick Owens opened his Paris collection with floor-scraping coats and pebbly wool dresses, the models’ heads covered in knitted caps that formed cages over their faces. Their lips were bright red. In his fashion, designer Owens was elegant. And he raised the bar with beautiful leather jackets, among his most beautiful, with dolman sleeves; cropped at the waist, they were worn with slim, draped wool skirts in a slightly contrasting tone. After his January Paris men’s show, with its Oscar Wilde allusions that landed like a heavy volume, designer Dries Van Noten use of 17th-century Asian silk prints in his women’s show on Wednesday felt comfortably at home in his world. Maybe Mr. Van Noten can’t be funny on a runway. END_OF_DOCUMENT_TOKEN_TO_BE_REPLACED 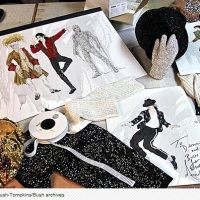